Interesting case of George Wythe, first law professor of US

- Mentored and/or Taught many greats of those years as perceived by others with Thomas Jefferson being one of his best students.

- Rev. Lee Massey on George Wythe:
"the only honest lawyer I ever knew."

- Jefferson on Wythe:
"He was my ancient master, my earliest and best friend, and to him I am indebted for first impressions which have had the most salutary influence on the course of my life."

- Wythe's unequivocal statement shared below was one of the first instances when there was a mention of the power vested on court to hold a legislative act unconstitutional:
"Nay more, if the whole legislature, an event to be deprecated, should attempt to overleap the bounds prescribed by them by the people, I, in administering the public justice of the country, will meet their united powers at my seat in the tribunal; and pointing to the Constitution, will say to them, 'here is the limit of your authority; and hither shall you go but no further."

- Today as part of Father's Day wisdom, we would like to present the death scandal of Professor George Wythe. This story is being shared as part of learning from history:

- Death scandal of George Wythe:
George Wythe enjoyed good health throughout his life while practising law, and by being a judge even at the age of 80, and even after going through one of the interesting and challenging times in the history of the country.

Before sharing this scandalous real story, we would like to mention that this story is being shared not to sensationalize history, but more to learn from history.

George Wythe, who believed in equality and liberty even then, had already freed a woman and man, and had them part of his house as a freedman and freedwoman, one fulfilling the role of a cook, and another working as a household servant. In addition, Mr. Wythe was very close to his 16 year old grandnephew, George Wythe Sweeney, who often lived with Mr. Wythe, and got a generous attention from his grandfather. But, despite being the grandnephew of one of the honest and reputable lawyers of his times, Sweeney was not only young to understand to value of this association, but also had already gotten a name for being a troublemaker. Sweeney was also held for forging cheques under Mr. Wythe's name, and for stealing several of his possessions to probably pay for gambling debts. Though Mr. Wythe took note of the transgressions of Sweeney, Wythe hoped that the youngster would mend his ways with maturity.

But, as per historical presentations, Sweeney never mend his ways, and instead might have poisoned, George and his two household servants. As per medical records before and after Mr. Wythe's death, he and one of his servants died of Arsenic poisoning, most likely due to greed of Sweeney to take grab of Mr. Wythe's wealth.

- Did Sweeney get sentenced?
Considering the connection between Mr. Wythe and President Thomas Jefferson, this particular case drew attention from all corners bringing in two high profiled lawyers, William Wirt and Edmund Randolph to represent Sweeney, not due to the strength of the case, but more due to the notoriety of the case.

- Case Details:
Though everyone expected Sweeney to be hanged for his repulsive action, autopsies of Mr. Wythe and his servant, Brown were botched. Also, the medical evidence was not strong enough for jury to confirm the sentencing of Sweeney.

The most crucial element of the case was the other servant who was able to recover from poisoning, Ms. Broadnax, was barred from testifying because of her race, which could have completely tilted the jury's decision.

- Did justice prevail?
The evidential law was not sufficient at that time to sentence Sweeney, but neither could Sweeney enjoy the will of Mr. Wythe, nor was he allowed to stay in Virginia for rest of his life due to public anger that drove him out of the state never to return.

- Moral of the story: There are many aspects to this story.
1. Value of a person needs to be felt to be appreciated. In this story, George Wythe was revered by the entire nation at that time as could be seen by various eulogies out there, but his grandnephew's lack of maturity and proper education prevented him from seeing Mr. Wythe's wisdom and insight.

2. Bad habits such as, gambling and stealing could have a domino effect taking a person to extreme measures of action.

3. Barring Broadnax from testifying solely for her race not only changed the history of this case, but also showed the plight of law at that time. Hopefully, rule of law in the 21st century will take us forward towards equality and liberty rather than moving back to the past.
FactBook Stories: Discussion LLC - SRIKANTH KIDAMBI VAL-U-PRO CONSULTING GROUP

Scientist who came up with Ohm's Law. What is Ohm's Law?

Do you know?
When Ohm released his treatise, many scientists reacted harshly against him and his theories.

His Ohm's Law was considered a web or tissue of naked fantasies by his peers.

Ohm even had to leave his teaching role for the mistreatment meted out to him.

Finally, after close to 20 years, he received due justice in the form of professorship and Copley medal.

How did Dr. Rafiki resolve the differences between the two Lhasa Apso dogs & the Pekingese dog?

The two Lhasa apso dogs, which traced their origins to Buddhist monasteries were having argument with the Pekingese, which was pompous about his genealogical association with the emperors of China.

They brought up this issue to Dr. Rafiki, who unlike the monkey that ate up all the bread when two cats came for resolution, is a honest mediator. As soon as he heard their versions of the story, he immediately understood that this case revolves around superiority complex.

While Dr. Rafiki was scratching his head on the best way to bring the two parties together, he got an idea. Here is the rest of the story in pictures and text. 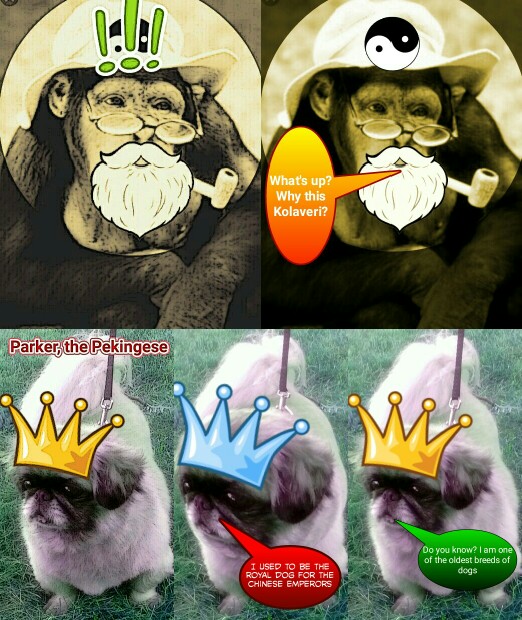 Text Story:
Dr. Rafiki: Why this Kolaveri? While thinking about what could be the reason for the fight

Dr. Rafiki figured out that this fight between the two groups revolved around superiority complex.

How did Dr. Rafiki resolve the differences? We will see that soon.